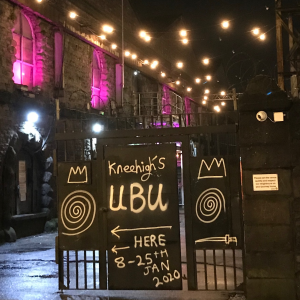 It has been a busy few weeks in the trips calendar for the Drama Department. We have been fortunate enough to take Drama students from Year Nine to Upper Sixth to three productions in three different cities as part of their Academic course.

We began with a trip to the grunge venue at the Bristol Marble Factory to see ‘Kneehigh’s ‘Ubu! A Singalong Satire’. This production had the feel of a gig as the audience stood around the stage and were confronted in close quarters by the vile anti-hero Alfred Jarry’s Dadaist Ubu Roi. The play explores Ubu’s rise from social outcast and sewer rat to an authoritative dictator, reflecting a number of political events throughout both recent and the not-so-distant past. The audience was encouraged to sing along to a wide variety of songs which reflected the mood and the messages. The production was topped off with our Teacher of Drama Mr Morgan’s theatrical dreams being realised as he was dragged up on stage to compete in the ‘Lovelyville Olympics’, wherein true ‘Green Army’ fashion RGS Worcester proved victorious.

Our next two performances were in great contrast to this play. We travelled to the RSC in Stratford-upon-Avon to see ‘A Museum in Baghdad’. This bilingual piece was performed in both English and Arabic and crossed two time periods in Baghdad’s history from 1926 to 2006. It delved into the British occupation, and later the USA’s, and how this affected the identity of the Iraqi people and their heritage. 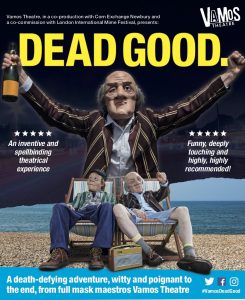 Finally, we had a local trip to The Swan Theatre, Worcester to see the Worcester-based Vamos Theatre Company perform their fully masked piece, ‘Dead Good’. Britain’s leading full-mask theatre company showed why they are internationally renowned as they took us on the journey of Bob and Bernard living out their final days, enabling us to run the whole gamut of emotions. This piece was outstanding and was devised around two years of research into palliative care which was evident and moving.

An ‘Oarsome’ Accomplishment! Music To Our Ears