Tazmin Barnes, Upper Sixth, recently reached the National Final of the UK Songwriting Contest (UKSC) with her original composition called ‘9 More Lives’. The contest attracts over 5000 entries annually and is organised in partnership with the BRIT Trust (of BRIT Awards fame). The UKSC judges are top Grammy, Emmy, CMA and BRIT Award-winning Gold and Platinum Album producers and artists. This is the second time that Tazmin has reached the National Finals. 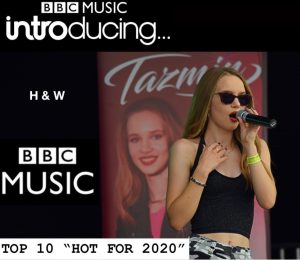 Her song ‘9 More Lives’ has featured regularly on BBC Music ‘Introducing Hereford and Worcester’. The show’s presenter, Andrew Marston, listed the song Eighth in their ‘Top Ten tracks for 2019’ during their end of year review of the best music from the region. He commented, “This new single has just proved her ever-evolving talent, having achieved one of the best songs we have received this year.” He also listed Tazmin as one of their ‘Hot for 2020’ artists following in the footsteps of other local artists Becky Hill and Ellie Goulding, both of whom were originally given their first opportunities on his show.

Tazmin has also been booked to appear later in the summer at several local festivals (after her A Levels are completed!).