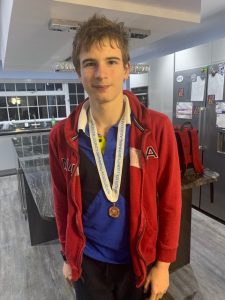 Alexander Cutler Tucker, Year Eight, recently took part in his first-ever County Championship Swim competition. During the two weekend meets, Alexander competed in nine separate events encompassing all four strokes at various distances. He made it into the Final in a couple of events, and during the competition, he achieved no fewer than eleven new personal best times.

Furthermore, in the last race of the final weekend, he won a Bronze medal in the 100m butterfly and knocked more than six seconds off his entry personal best. Alexander has only ever competed in the 100m butterfly on three occasions, once to qualify for County Championships, once in the heat and then again in the Final.