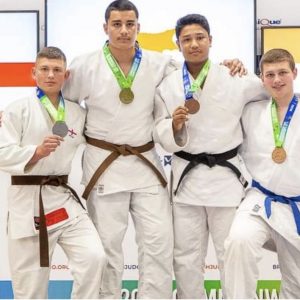 Loïc Keasey, Year Ten, had the honour of representing England for the first time at the Commonwealth Judo Championships which were held at University of Wolverhampton, Walsall last weekend.

Loïc fought in the over 73kg category which included champions from Cyprus and India. At 75kg, He was the lightest fighter by far with two of his opponents weighing in at over 100kg. Despite this obvious disadvantage, Loïc used technical skills, mental fortitude and single mindedness to his advantage. He fought valiantly in physically demanding circumstances throughout, eventually losing in the Final to a Cypriot fighter who weighed 105kg, which is 5 stone heavier than Loïc!

Loïc’s dad Paul said: “The entire journey of representing his country, training for the event and producing high level performances on the day of the tournament are memories that I am sure will stand Loïc in good stead in the future.” 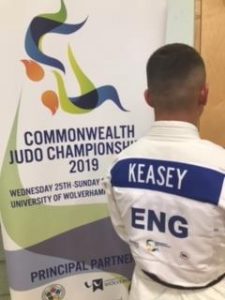 More than 1,000 international Judo stars competed during the five-day event with teams attending from as far as New Zealand, Australia, India, Malta, Cyprus, South Africa and many other Commonwealth Nations as well as all the Home Nations.

Our Headmaster, John Pitt commented: “It is fantastic that Loïc was able to represent England in Judo and to achieve a Silver medal is a superb achievement. Loïc is a real all-rounder and it is excellent that his ability in Judo is being recognised at this level.”

Loïc is a member of the Elite Athlete Development Programme. This has seen him excel not only in a niche sport (Judo) but also achieve sporting excellence in Rugby, namely as a player within the Worcester Warriors ‘Development Players Pathway’ and as part of the U15A team.