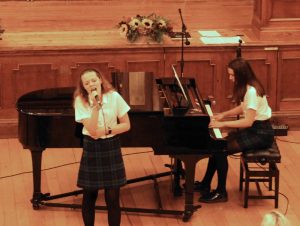 Perrins Hall echoed to the sound of our first Tea Time Concert of the year last week, showcasing the talents of our Year Eleven GCSE class and pupils.

From the piano, George Flinders performed the lively and exciting ‘Masquerade’, and Bella Hulbert performed Chopin’s reflective ‘Prelude No.6 in B minor’. Abbie Whiteley performed, ‘On My Own’, as an oboe solo, an arrangement from the musical ‘Les Misérables’, soon to be performed here at School. There were a number of beautiful vocal performances: from the contemporary genre, Maddie Atkinson sang, ‘Used to be Mine’, from the musical ‘The Waitress’. Maddie is soon to be competing in ‘Teen Star’, and based on this week’s performance, she will do very well. In the classical genre, Bella Hulbert sang Greig’s, ‘Solveig’s Song’, demonstrating the folk influences of his beloved Norway and Lilly Heyburn, who sings with the National Children’s Choir, sang Pergolesi’s sophisticated song, ‘Se tu m’ami, se sospiri’. George Oates sang and accompanied a self-penned piece, called, ‘Lonely People’. This follows in the tradition of some excellent singer songwriters to attend RGS Worcester and we look forward to hearing more of his work in the future. Bella Hulbert closed the concert with a rendition of the first movement from Saint-Saens, ‘Violin Concerto No.3’. Bella, an already accomplished performer, is now attending the Guildhall School of Music and Drama for their Saturday school and we can look forward to ever more sophisticated performances in the future.

We look forward to our next performances:

Horsing Around! It’s a Drama in Cornwall