Last week was an opportunity to celebrate RGS Rugby with parents and pupils alike at the Junior and Senior Rugby Dinners. On Wednesday, over 150 people attended the Junior Rugby Dinner in Main Hall. Awards were handed out for the Players of the Season, the Top Tacklers, the Men of Steel and the RGS Sports Charter Awards. It was a fantastic evening filled with speeches, awards, buffets, bars and auctions. 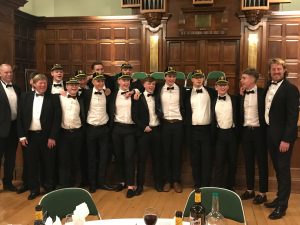 The Senior Rugby Dinner was held in Perrin’s Hall on Friday night. A glitzy black-tie affair was very well attended and provided a carnival atmosphere throughout the evening. The event was a chance to thank parents and pupils for their dedication to RGS Rugby over a number of years and to hand out prizes for exceptional contributions. The prizes mirrored the Junior awards, with James Mann, Upper Sixth, winning 1st XV Player of the Season, Jude Rees, Lower Sixth, winning 2nd XV Player of the Season and Max Griffiths, Year Eleven, winning Under 16 Player of the Season. Gold Rugby Colours were awarded to Upper Sixth students Ollie Witcomb, James Mann and James Aikman for their immense contributions to RGS Rugby both in 15s and 7s.

Our thanks go to everyone who managed to survive the various illnesses in order to attend the events, and especially to our catering team. Thank you also to Heather Vries, Amanda Fisk and Matthew Brereton for their unbelievable efforts in organising Raffle and Auction prizes. With their help and the generosity of other parents bidding for items, we were able to raise substantial funds to continue the upgrade of Rugby provisions. 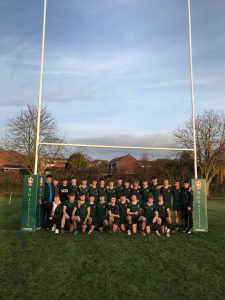 Following the Senior Rugby Dinner on Friday night, the 1st XV had their final game of the season on Flagge Meadow against Shrewsbury School. It turned out to be one of the best performances of the term with RGS winning 38-14.  RGS raced into a 21-0 lead after 15 minutes with three quick tries. Sharp turnover attack, hard running lines in midfield and some excellent counter-attack proved to be too much for the Shrewsbury XV in the first half, but they battled back to score two good tries of their own, providing an excellent spectacle for the large home crowd. Thank you for your hard work and congratulations on a very successful season!