As is often the case with Greenpower events, we had an early start, and a group of Year Eight pupils met at School for a 5.30am departure. It is not every day pupils have the chance to drive around and compete at Silverstone, the home of Formula One in the UK, and so all members of our ‘Superformance Team’ were buzzing with excitement.

Before racing, there are numerous safety and regulation checks each team has to adhere to and pass, before being allowed to compete. Having fitted a fan to cool the motor and adjusted various other parts of the car, we passed these checks with flying colours, turning heads as we did so. This meant we were quickly allowed out for a full practice session to learn the track which our drivers relished.

With the race batteries in place and practice ones swapped out, the nervous energy of the team was palpable. Lottie Nicholls was the first in the driver’s seat lining up against 95 other teams from all over the world. Having qualified for the race as 25th fastest we were now up against teams from Singapore and right across Europe.

Lottie started well and our position around 20th was stable. Lucy Whiteley was next in the driver’s seat and after a quick pitstop was soon whizzing round. The sun was shining and all were loving the day thus far, however little did we know what was to come. Another driver pulled straight in front of Lucy on a tight corner, causing Lucy to jump on the brakes to avoid a certain collision. This spun the car exerting huge pressures on the steering column. Lucy quickly noticed something wasn’t right with the car and soon realised the car was not driveable. 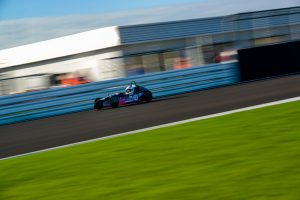 Lucy had avoided a certain crash but the front wheels were now pointing in opposite directions! Mr Holt, Mr Batchelder and Mr Boss came to the rescue with some brute force to bend metal back into place and to get the car back on the track again. However, our position had plummeted to 90th in this time and there was precious little time to regain a better standing. So frustrating! Alex Friend finished the race a worthy 76th after the misfortune encountered.

Fortunately, between races there was a two-hour break which allowed us to have a better look at the car and fix bent steering arms! We lodged a protest against the other team involved and felt vindicated that the organisers said Lucy reacted quickly to avoid a very bad driver! However, we still had to start the second race in our finishing position of the first meaning we had to start right at the back of the grid.

Grace Williams was in the driving seat this time and made an excellent start weaving in and out of numerous cars in front. Better still, the car was driving and behaving well. Our pit stops were getting better and better with the help of Keira Higgins and Sofia Stolt and so after an excellent first leg, Katy Pitt took the reins before Sophie Jackson took the final leg.

The chequered flag was waved and we were thrilled to say we finished 18th in the last race of 2019. This was an outstanding result having started 85th on the grid!

We all had an amazing day and summed up a thrilling season of Greenpower 2019. We could not have got this far without the help of Mr Holt, Mr Batchelder and Mr Boss who supported us and kept helping us develop the car throughout the season. Roll on Greenpower 2020!