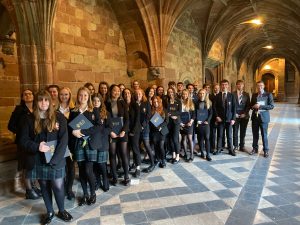 On Tuesday, the RGS Chamber Choir made their first outing of the year as they sang Evensong at Worcester Cathedral. To sing this historic and beautiful service in any Cathedral is always a notable event, but to do it on ‘home turf’ with several parents and supporters in the congregation made this particularly special. Twenty-four students, from Year Nine to the Upper Sixth, were joined by four teachers and a former student to form the choir, which was conducted for the first time in public by our new Director of Music, Mr Soman.

The Chamber Choir sang Herbert Brewer’s D major setting of the Magnificat and Nunc Dimittis, as well as all thirty-two verses of the appointed Psalm for the day. The musical highlight was the anthem – ‘Illumination’ by the Irish composer Michael McGlynn – a haunting unaccompanied setting of the words found on a Seventeenth Century tombstone. Lillian Heyburn, Year Eleven, was the soprano soloist, bravely and beautifully singing the opening solo line with purity of tone and excellent intonation before the Choir joined with their close harmony setting of the Latin text. 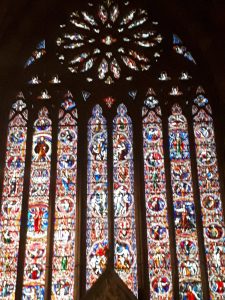 The Chamber Choir looks forward to performing this piece once again at the annual ‘Lights of Love’ Service, hosted by St Richard’s Hospice, in Worcester Cathedral on Friday 22 November, as well as leading other services throughout this academic year.