Did you know that the Miffy books were written by Dutch author Dick Bruna, and that in the original Dutch, Miffy, the rabbit, is called Nijntje? Or that across the globe there are 24 million Dutch speakers, including a significant number in South American Suriname?

Dutch, like English, is a Germanic language that sits like a halfway house between German and English. RGS Worcester pupils were able to enjoy an introduction to the Dutch language last week under the direction of Dr James, who spent two years living in the Netherlands studying at the Royal Conservatory, The Hague. 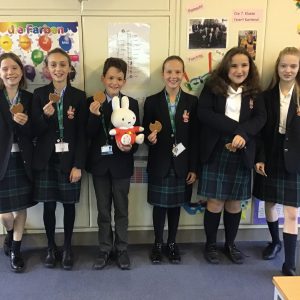 Pupils were able to attend a lunchtime session or experienced a short taster as part of a German lesson during European Week of Languages. Since Dutch resembles German so closely in syntax and spelling, pupils who study German were able to see the connections and get a feel for the language quickly. They learnt basic greetings, how to count to 10 and were able to recognise lots of common words. They also discovered that with a good knowledge of German other European languages including Norwegian, Swedish, Danish, Icelandic and Yiddish, can all be accessed more easily.

As part of this week aimed at exploring other languages and promoting the idea that linguistic diversity is an important tool in achieving greater intercultural understanding, this was one of many additional activities on offer in the MFL department.

Pictured here are some of the pupils who attended the lunchtime session enjoying stroopwafels and a singing Nijntje!