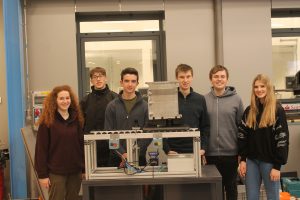 The Engineering Education Scheme (EES) workshop took place on 22 and 23 of January at the Telford Innovation Campus, part of the University of Wolverhampton. An account is detailed below written by Malachy Larkin, Lower Sixth:

“The scheme runs with the aid of engineering companies, such as Worcester Bosch, who assign mentors. The team this year consisted of Maxim Eddy, Tom  Churchill, Poppy Haughton, Honesty Shaw-Young, Alex Coleman, and myself. We were accompanied by our mentor Sergui, from Worcester Bosch and Miss Daniell, Teacher of Physics, both of whom provided support over the two days. Our project was based on an issue that Worcester Bosch struggles with: boiler water adaptors being unreliable and inconsistent. Our task was to invent a more viable solution that would speed up the fitting process, whilst ensuring the quality of the final product. 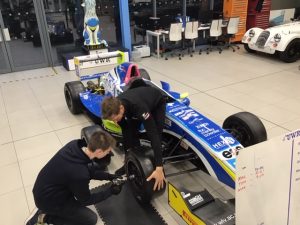 “The first day began with an introduction from a representative of the University of Wolverhampton, shortly followed by workbench assignments, our base camp for the next two days. The day was spent mocking up the Bosch assembly line, utilising the machinery available, to develop our solution as well as learning how to use a new version of CAD to model our designs. During the first day, our project went from concept to prototype. Before we departed, we were given the opportunity to work on the University’s Formula 3 car; a crash course in tyre changing was followed by a competition between all of the EES students and mentors. Our very own Poppy brought home the victory finishing just 0.2 seconds slower than the team’s professional technician. 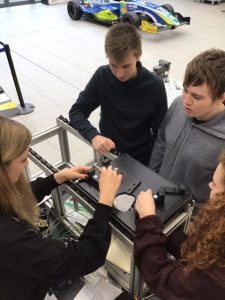 “At the start of the second day, we evaluated our design then planned our next steps. After some time spent testing and tweaking our project and completing the CAD drawings, we were satisfied with the progress. During the afternoon we were given a tour of the University’s impressive facilities including their motor-racing workshops (for their F3 and Morgan teams) and field-leading research laboratories, encompassing everything from thermoplastic research to pioneering 3D printing of silver. We left a little later than planned so that we could all try out the F3 simulator; we found it far more of a challenge than expected to finish the course without incident!

“We now have a few more improvements to address before writing up our report and preparing for the final presentation day in May where teams from 60 different schools will pitch their projects to a panel of engineers before awards are presented.”