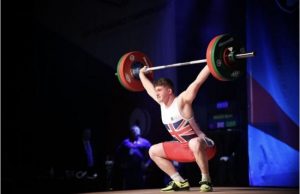 Myren Madden, Upper Sixth, has been selected to represent Great Britain for the second time, this time at the EWF European Youth Championships which will be held in Israel in December.

Myren was selected following a winning performance in the British Midland Championships where he hit personal bests of 117kg snatch and 142kg clean and jerk to extend his British records. Myren said it was the toughest competition to date due to timings and long waits between the lifts. He has also been awarded a place on the Talented Athlete Scholarship Scheme (TASS), awarded by Sport England in partnership with talented athletes, education institutions and the Sport England Talent Programme. It allows athletes in education to get the best from their sporting and academic careers without having to choose between the two, providing vital support services.

At RGS Worcester, Myren is part of the Elite Athlete Development Programme and this has facilitated a focus on his sporting career which has led to him being released from the second half of the Rugby season to focus on his International weightlifting.

Mr McGarry-Cross, Head of Rugby said: “We are all incredibly proud of Myren’s achievements and his selection for the GB squad. He was a standout player in the Modus Cup and during the first half of the Rugby season, but his focus now should be on his European Youth Championships and we wish him all the luck in the world. Myren is a great example of how the School caters for elite athletes, putting the individual’s needs ahead of anything else in the pursuit of excellence.”

Myren’s success was reported in the Worcester News last week and we invite you to read the article here.