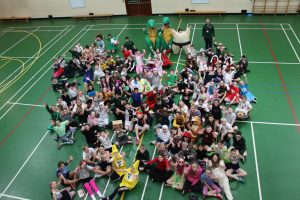 In December last year, RGS Worcester’s Year Seven initiated their annual NSPCC campaign to raise awareness for this charity and the work it does with children who are facing a tough time. The NSPCC showed the pupils examples of how children can be treated; this made everyone agree it was time to raise some money. Each of the Form groups collected sponsorship and worked hard during their Christmas holiday. We all knew even a small amount of money could still help a child so much. 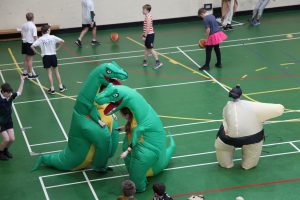 “On 24 January, RGS did a fundraising circuit for the NSPCC. We had plenty of costumes from NSPCC Buddies to sumo wrestlers and lots of other creative outfits which we made ourselves. Our fundraising ranged from activities we have done before in PE such as wall sits, planks and Netball shooting to exciting new ideas like the Long Jump and dragon wrestling. We worked very hard, especially trying to prove our jumping skills, so the rest stations were very popular.”

Kia Giles from the NSPCC returned to RGS this week to explain what our money will be used for and to thank us for our hard work and family and friends contributions. We raised a record total of £2,500!

Well done, Year Seven, for your amazing contribution to the NSPCC!