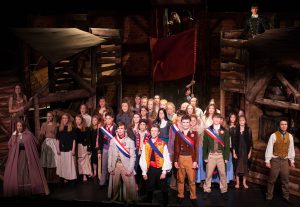 What better setting for the iconic Les Misérables than the outstanding Performing Arts Centre. Space and facilities rival those of a commercial theatre and from walking in through the foyer to taking your seat, it is a truly memorable experience and a fantastic opportunity to witness RGS students performing.

George Garrity, Upper Sixth, and his anguished portrayal of Jean Valjean was something to behold and he immediately established himself as the deserving lead from the opening scene. Together with the impressively domineering stage set and militaristic uniform, the hierarchy was very quickly recognised between guards and prisoners. This was wonderfully heightened with Cameron Taylor, Lower Sixth, brilliantly playing a menacing and forceful Javert as the powerful antagonist. This duet made Valjean’s identity crisis all the more poignant as he made the transition from imprisonment to freedom. In stark contrast, Freddie Nock, Year Ten demonstrated a pious depiction of the Bishop of Digne, moving in his kindness and guidance towards Valjean; he must be commended on the difficult bass this part demands; he executed it impeccably. 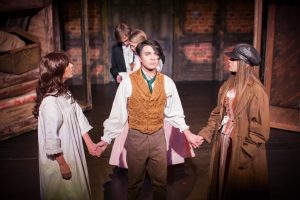 Garrity’s rendition of ‘What Have I Done’ beautifully depicted Valjean’s wretched history and position; he was pitch-perfect, skilfully coping with the huge range the song commands. The orchestra shone during this early piece and particular credit should go to the strings who had some complex and allegro moments. The seamless transition from the iconic score to ‘At the End of the Day’ celebrated both the orchestra and the talents of the members of the chorus, who together were a harmonious and powerful force on stage. As with previous performances, the voice of Isabella Hulbert, Year Eleven, is unrivalled in its purity and our first introduction to Fantine did not disappoint. A superb singer and actress, Isabella perfectly portrayed Fantine’s pain and vulnerability.

‘Lovely Ladies’ opened with fitting stereotypical accents; the bawdy and crude lyrics were sung with such gusto, only continuing to demonstrate the enviable versatility of the cast. Here the audience was able to appreciate fully the efforts gone into costume, make-up and hair and the girls, in particular, were suitably tousled and rouged. As the audience witnessed Fantine’s descent into shame and poverty, Hulbert’s voice reached new heights and her harrowing rendition of ‘I Dreamed a Dream’ was captivating, not only in her ability to sing such a demanding part but also to depict Fantine with such thoughtful and mature characterisation. This emotionally-charged piece despairingly told her story and is certainly one of Hulbert’s most assured performances to date. Garrity continued in his anguished and vacillating presentation of Valjean with ‘Who am I?’ and the stark contrast between his eventual resolve and Fantine’s deterioration was touching, with her death movingly portrayed by both. 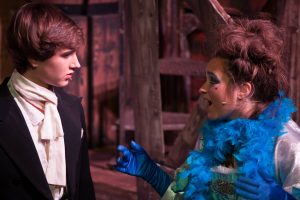 ‘The Confrontation’ saw both Garrity and Taylor confidently duet with masculine fervour and their voices commanded the attention of all. The debut of Niamh Goold and Isobel Hadley (for different performances), Year Eight, as young Cosette demonstrated the talents we have in the Lower School and both should be incredibly proud of the solo ‘Castle on a Cloud’ which was tender and pure in its depiction of Cosette’s wretched position. Frances Broadbent and Alex Owen, Upper Sixth, deserve acclaim for their superbly comic depiction of the Thenardiers. Owen’s whimsically devious Thernadier was brilliantly matched by Broadbent’s waspish Madame Thernadier, whose voice is certainly something to behold, and together their stage presence was palpable. Yet again, the chorus ensemble stood out here and was richly professional in their support for this scene: the spirited choreography and clever use of space made this a standout moment. 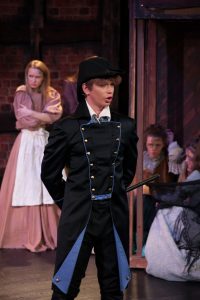 ‘Stars’ saw Cameron Taylor stunningly perform amidst the heights of the stage set and beautifully depicted his moral rigour and tenacity in his search for Jean Valjean. Nick Kaleniuk, Year Ten,  was perfectly cast for the role of the spritely and savvy Gavroche who dutifully lead the voracious chorus in their disenchantment, protesting against the system. Another superb casting was Ben Sears, Year Ten, as student leader Enjolras who devotedly led his band of rebels. Though small in stature, his impressive voice and stage presence rivalled those of the lead parts and he was a firm favourite of the audience. The supporting student roles saw Freddie Nock, Ethan Farmer, Year Eleven, George Jasper, Year Ten, George Oates, Year Eleven, Lottie Jones, Upper Sixth and Ashley Kilday, Upper Sixth, perfectly accompany Sears and credit must go to their group parts as well as their individual lines where they successfully conveyed their agenda to the audience. ‘Do you hear the People Sing’ was again a phenomenal moment and one which had everyone empathising with their cause. The orchestra and chorus dazzled once again in this number, often seen as the crux of the play itself, and the students certainly did not disappoint in their delivery. Credit must also go to Mr Soman as the role of Musical Director. Each piece was perfectly timed and brought real significance to some of the more epic scenes. 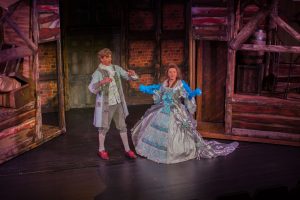 Performances of Eponine by both Alexandra Patterson and Tazmin Barnes, Upper Sixth, were noteworthy and their powerful depiction of unrequited love shone throughout note-perfect singing, particularly in the stand-out moment with ‘On My Own’. Eponine was perfectly matched by Tom Ehlers, Lower Sixth, as the handsome and disarming Marius. Heini Hughes, Lower Sixth, a familiar face on the RGS stage, once again dazzled with her astonishing soprano as Cosette, and this trio of mature, flawless voices in ‘A Heart Full of Love’ was particularly touching. ‘One Day More’ again brought the talented voices of the students together as they tackled such a gargantuan number with expert dexterity. The orchestra also wowed at this point and together they created a piece that would not have been out of place in the West End. 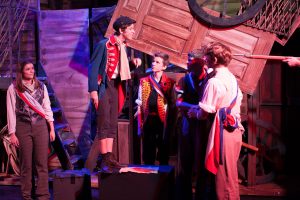 Act Two allowed for full admiration of the ingenious set; the symbolic barricade was fully exposed and turned towards the audience, Sears once again led his band of students to glory as their determined voices permeated the hearts of all. The chaotic scenes that followed were wonderfully executed with students carefully managing the difficult entrances and exits of the barricade with ease. These moments exemplified the hard work that goes into the imagination of the scenes and special credit should be given to all Stage Crew in this incredible feat. The Lighting and Sound team also deserve praise, as they convincingly took us all back to nineteenth-century France. With this as the backdrop, the depiction of Eponine’s death was solemn and audiences were incredibly emotional. 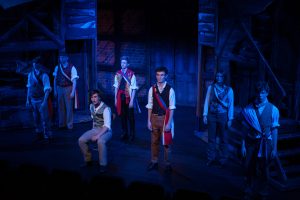 It would be extremely difficult to review this masterpiece without lauding Jean Valjean’s ‘Bring Him Home’ sung atop the barricade. The soaring notes of this piece were adeptly navigated by Garrity who presented such beautiful and tender emotion at this crucial time, there certainly was not a dry eye in the house. The audience was undoubtedly put through their paces in an emotional roller-coaster as we watched Gavroche’s death followed very quickly by the final bloody battle. Once again, the students were superb in their combative choreography and, as we watched each fall, the deaths were brutally and emotionally conveyed with limp bodies strewn over the barricade. If Garrity’s singing wasn’t enough throughout the performance, the physicality in the sewer scene brought his desperation and fervour to the forefront of the stage as he bravely assisted Marius. Taylor again delivered with resonance amidst the heights of the barricade with his final moving farewell. Ehlers’ stand-out moment was certainly his portrayal of Marius in ‘Empty Chairs at Empty Tables’ which was astoundingly heart-breaking. The timbre of his voice delivered perfectly as he grieved over his lost comrades, accompanied wonderfully by the swelling bars of the orchestra.

After much suffering, Marius is given deserved relief with ‘A Heart Full of Love’ as he reunites with Cosette and a phenomenal trio is delivered by Garrity, Ehlers and Hughes. Here the harmonies were the most precise in the entire performance and intricately weaved in and out of with incredible clarity. Sumptuous and amorous, the wedding scene followed and was staged magnificently.

Valjean’s poignant death concluded the tragedy and was depicted solemnly with Fantine and Eponine’s return. Following this with the grand finale of ‘Do You Hear the People Sing’ with the full cast re-emerging from the aisles to join together in all their splendour together on stage, we were not disappointed.

The talent exhibited by each and every student involved is nothing short of extraordinary: the best production I have ever seen at school level, Mrs Witcomb has more than triumphed in her role as Artistic Director and Producer tackling such a popular and time-honoured musical. In speaking to Mrs Witcomb about the opening night she stated, “The fact that we had a complete standing ovation is unheard of in our history of school productions and was incredible to see.” It is difficult to pinpoint one key stand out moment as the entire production was immaculate in its portrayal of love and compassion against the backdrop of the aftermath of the French Revolution. What makes this performance so exemplary and memorable is the sheer number of talented voices we currently have at RGS. This is a very exciting time for the Performing Arts Centre to boast of such a gift.

“Not being heard is no reason for silence.”
Hugo, Victor, Les Misérables

RGS Worcester would like to thank Mrs L Bond from the English Department for writing this review and congratulate all performers for this fantastic production alongside all of the staff who contributed. Bravo!