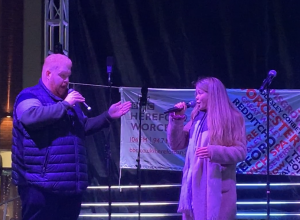 Heini Hughes, Lower Sixth, was invited by BBC Hereford and Worcester to perform at the Worcester Christmas Lights ‘switch-on’ event on Thursday this week. She sang two operatic duets with Luke Swatman (affectionally known as Worcester’s Pavarotti) as well as one solo to hundreds of people gathered around the main stage at Cathedral Plaza. The Worcester community was able to see first-hand the talented 16-year old in action. She has also been invited to perform at Malvern Theatre on Sunday 8 December with the Worcestershire Symphony Orchestra; this is for the BBC Hereford and Worcester Christmas day broadcast which is recorded in advance in front of a live audience of 700 people.

Heini will be playing a key role in next week’s school production, Les Misérables. As well as being busy with the school production, she currently attends the Birmingham Junior Conservatoire every Saturday. It has been a very busy term!

Lest We Forget Fencing First Place