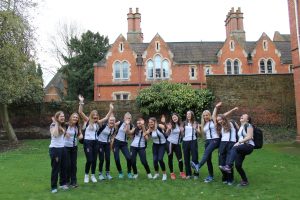 It is the England Hockey Schools National Indoor Finals this weekend and we have two teams, the Under 16 and Under 18 girls, taking part. We invite the RGS community to come along to watch and support our girls at Bromsgrove School. The event runs from today (Friday 10 January)  to Sunday 12 January. We send best wishes from all at RGS Worcester – good luck!

The Hockey season last term was full of games lessons, training and fixtures for all age groups. The Under 14A team gained their first experience at the eleven-a-side game at the County tournament, in which we witnessed an incredible amount of progress throughout three games of Hockey.

The Under 16B team played in the Tier 3 County tournament, with all three games closely fought and with the squad being a combination of Year Ten and Eleven girls, they look to provide great depth to our future senior teams.

Cheltenham Ladies College hosted us for matches for tournaments for Under 14, 15, 16 and Under 18 teams as well as the annual Under 12 and 13 CLC tournament, in which both age groups made huge progress throughout and were both very close to securing a place in the semi-final after positive results in the group games. 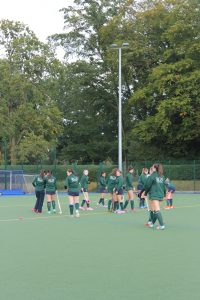 Just before the half-term break, we had a block of eight teams playing Hereford Cathedral School, with wins for all five junior teams and our Under 16A team. Our two senior sides were slightly depleted to allow our elite players to play regional and national league club games, providing the opportunity for others to experience a great standard of senior Hockey.

In the England Hockey competitions, our Under 16 team had an extremely high-quality game against Clifton College, which saw them move into the Tier 2 plate competition along with the RGS Under 18 side.

In the Independent School Hockey Cup, the Under 13 team convincingly beat King’s Worcester to play St Benedict’s Ealing for a place in the national quarter finals, unfortunately losing in a very close match, 5-6.

Our junior teams enjoyed friendly training matches with RGS Dodderhill and The Chantry School throughout the term. Our Year Seven girls all had the opportunity to play in A-F team matches against Princethorpe College, all teams were undefeated with five wins and a draw. They had the opportunity to play with Year Eight and experience the eleven-a-side game in A and B matches against Dean Close.

The Under 14A and 15A teams both finished Runners Up at the King’s High Warwick tournament.

The Michaelmas term drew to a close with a week of fixtures against King’s Worcester, for all age groups, which meant we had over 150 girls representing RGS out on a Hockey pitch, being resolute, gracious, selfless and willing to participate. 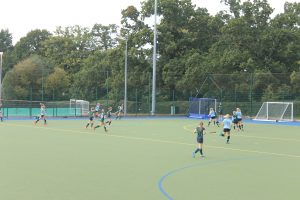 The final Hockey event of the year was the annual House Hockey competition, in which Year Eight to the Upper Sixth pulled out their Christmas outfits and sticks were decorated in tinsel to have everybody involved, competing in excellent spirit.

Throughout the term our coaches and senior players worked with our Prep Schools, hosting RGS Springfield and RGS Dodderhill for matches. This provides an excellent transition pathway, ensuring that our RGS Hockey principles can be instilled from an early age. This term we will be working with local primary schools to deliver outreach sessions for those with less Hockey experience. Our thanks to all of the girls and coaches for a successful term of Hockey at RGS.