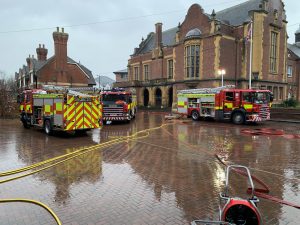 The blue flashing lights at RGS Worcester in the week before Christmas were not from the Christmas tree. Hereford and Worcester Fire and Rescue Service (HWFRS) conducted a live training exercise at RGS Worcester, which involved 14 personnel and three fire engines from Worcester and Malvern Fire Stations.  The exercise aimed to conduct firefighting and breathing apparatus training in a basement. 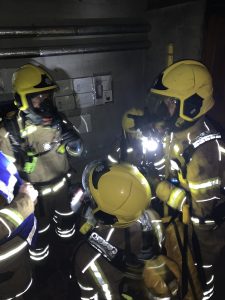 Watch Commander Carl Pearson of HWFRS commented on the value of the training: “The exercise at RGS enabled the crews to test our firefighting with breathing apparatus procedures in a confined space.  It was also a great opportunity to get further information about the design and layout of RGS, as part of our intel-gathering, should we ever be called there in an emergency. We welcomed the opportunity to work with RGS to deliver this training exercise.”

Mr John Pitt, our Headmaster said: “The School was delighted to offer the facilities for this important training for our local Fire and Rescue Service which, like many others in our vital public services, were on call over the festive season.“

The Magic of Song Hockey Good Luck Message and Summary