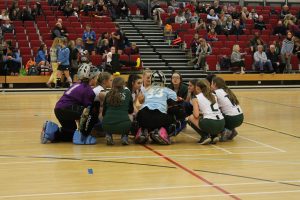 We are very proud that the Under 16 and Under 18 Hockey teams not only achieved a place in the England National Hockey Finals, setting them against the top ten schools in the country, but that two of our teams qualified. This was an accomplishment only attained by two other schools. Their dedication and commitment have been outstanding, training late into the evening after Christmas term end and even coming in to train over the holidays.

Before the Under 18 team departed, they enjoyed a squad breakfast and shared personalised booklets that expressed what each player thought was outstanding about their teammate. This team spirit and camaraderie is what makes this a strong side. It was unfortunate that they were plagued by injuries for this tournament, this included Captain Sophie Thompson, Jemma Moseley, and Sian Hooper. It was very fortunate that Grace Francis stepped in to lead the team and Izzy Pepperall played brilliantly as a late recruit to the squad.

The RGS coaches could not be prouder of the team. With incredibly busy commitments and difficult circumstances, they have achieved above and beyond what we could have ever expected, putting RGS Hockey amongst the best teams across the country. 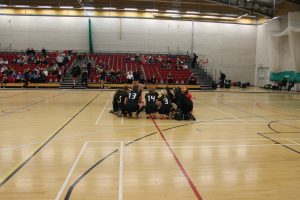 The Under 16 team had to demonstrate self-organisation from the outset in the National Finals and they were nervous but excited. Their determination and dedication meant the nerves were dusted off three minutes into their first game with Framlingham College. This squad has developed over the season and epitomises the RGS Charter for Sport. Winning their final match against RGS Newcastle and finishing seventh in the country, the team has an exciting future ahead for RGS Indoor Hockey. 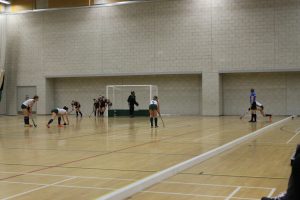 We would like to thank all of the spectators for their support during the season and at the tournament.

Indoor Hockey training will continue every Friday after school in the Tom Savage Sports Hall and girls from Year Eight upwards are welcome to train to become the next generation of our Indoor players.

For a more in-depth summary of the Under 16 and Under 18 matches please see below.

In a tough opening game against the reputable Wellington College, Lottie Atkinson created chances, but the opposition found the net twice to win the game.

The second Under 18 game against Millfield School was well supported by our Year Seven pupils who filled the stand to cheer us on. Alice Atkinson and Maddy Shaw defended strongly against immense pressure, but two goals were conceded in the first half. A determination to execute the game plan and a real resilience were rewarded with a late goal for RGS from Grace Francis which left the final score at 5 -1.

The evening Under 18 game brought lots of RGS family, friends and alumnae to cheer the girls on, who certainly put on a show. At 0-2 down, Amelia Lane found the net after some quality team possession. St Lawrence College took a 3-1 lead into half time, but Lottie Atkinson got RGS straight back into the game in the second half. At 4-3 down, in a must-win game for Semi-Final qualification, our Goal Keeper was taken off and even after a hattrick from Lottie the girls were disappointed to lose 4-6. The performance was much more the ‘RGS Way’ and the girls went home in high spirits set for their final group game the next day.

In their final match with Royal Grammar School Newcastle, Alice Liversidge made some excellent saves in goal including a penalty flick to keep a 0-0 score until late into the second half. A valid goal was disallowed and lots of unlucky decisions for RGS put them on the back foot, but they came back fighting with a goal from Lottie. Our Goal Keeper was removed again and under high pressure from Royal Grammar School Newcastle, being a player down and a penalty corner given at the final whistle meant we finished with a 1-2 loss.

Within three minutes of their first match against Framlingham College, Sadie Hingley scored for RGS. The opposition then took a 3-1 lead, with Ellie Nicholls relentlessly working the ball down the right-hand channel to win a penalty corner that Lara Shaw converted. Eva Barry kept the opposition at bay and Katy Marsh was composed at the back, although the game concluded with a 5-2 loss. However, it was a positive start in terms of a performance by RGS.

The second game of the day for the Under 16 team was against a very skillful St Teresa’s School team. RGS Captain, Kasia Cyrko, led her team with an abundance of energy and Darcy Gray stepped up and helped control the game. A 7-0 loss was discouraging for the RGS girls, but a positive review of performance was completed and aims were set for the next day.

In the match against Dean Close, Lara put RGS ahead, but Dean Close responded straight away, 1-1. Goal Keeper Lilian Heyburn was taken off and Grace Odell attacked with an increased amount of pressure to take the lead. Unfortunately, a decision against RGS meant Dean Close won 2-1 on a penalty decision.

With increased confidence, an endless willingness to push forward and continue the positive performance, the team was determined to do their very best in the final match. Ellie and Lara found the net in the first half and Kasia provided a 3-0 lead with minutes to play. Lucy Ball was consistent in attack and Isadora Hercules executed high paced out-letting at the back. Royal Grammar School Newcastle scored with minutes to play, but our Under 16 girls were rewarded with a win to conclude the tournament.