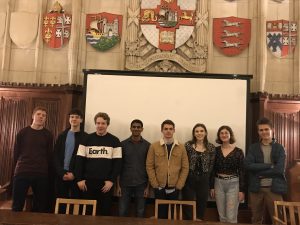 Over the last two weeks, RGS Worcester Debaters, sponsored by SME Solicitors, have achieved considerable success at both Bristol and Nottingham Schools Debating competitions, reaching the finals in both cases.

At Bristol, 36 teams from the South West, Midlands and Wales competed across four debates for a place in the four-team final. The RGS pairs of Isaac Baker, Upper Sixth, and Nicholas Fearon, Upper Sixth, reached the final in first place on the table after four debates, with Tess Rabjohn, Lower Sixth, and Zain Baig, Lower Sixth, joining them in third. In a final debate on the role of vigilante justice in very high crime areas, the teams were, sadly, narrowly beaten but were both magnificent. RGS also dominated the table of individual speaker points with Nick named second-best speaker in the whole tournament, and Isaac and Tess tied for third.

One week later, RGS pairs were once again in action at Nottingham, this time up against 40 teams for places in the final. At Nottingham, it was Elizabeth McCabe, Year Eleven, and James Preece, Year Eleven, who topped the table going into the final, also placing first and second on the speaker table. They were joined in the four-team final by Nick and Isaac, an outstanding achievement by this pair reaching their second open final in as many weeks. The novice final – for teams in their first year of senior competitions – was also dominated by RGS with the pairs of Kasia Czyrko, Year Eleven, and Katy Marsh, Year Eleven, and of Alice Ryan, Lower Sixth, and Ella Marsay-Jones, Lower Sixth, in that final. This was an amazing achievement with RGS filling half the finals places as well as seven of the top ten speaker places (out of 80). Unfortunately, as at Bristol, RGS was not able to win those finals but an incredible day nonetheless.

The RGS Debating Society finishes the half term in strong shape. Finals have been reached in one-day competitions such as Bristol and Nottingham. We have won the Worcestershire Cup for Public Speaking and are now about to compete in the Regional Final of the English Speaking Union Mace competition. Zain Baig is travelling to Windsor Castle in March for the final of the Historical Association Great Debate. A Year Nine and a Year Ten pair have broken to the Finals Day of the International Competition for Young Debaters at Oxford University. Furthermore, there is real strength in depth with wins from teams in every year from Year Nine to the Upper Sixth. The future is bright with key competitions such as Oxford and Cambridge yet to come…