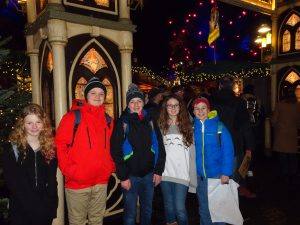 On 15 December a group of pupils along with staff travelled to the Cologne Christmas Markets. An account has been written below by Sam Taylor and Sofia Stolt, both Year Eight pupils.

“After the long drive there, we visited the night market. The whole area decked out in an array of Christmas decorations was amazing, with some great opportunities to buy souvenirs and gifts. At the entrances to the markets were huge gates with moving elves and fairies circling around the towers. We enjoyed trying some German food, such as frankfurters, pretzels and even waffles topped in ice cream, Oreos, chocolate and cream! On the walk back from the market, we gained some great views of the cathedral, lit up at night and the skyline in its night-time glory. 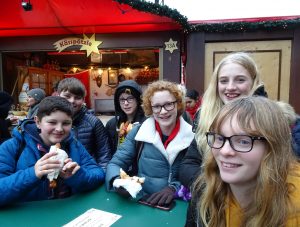 “For the majority of our full day, we visited the city of Cologne. Cologne Cathedral was once the tallest building in Europe at 475 feet. After ascending 533 steps, we made it to the top of the tower and what a view it was! We could see all of Cologne! Many amazing photos by different pupils were captured. When it was time to come down, we couldn’t help but stop to see the amazing bells that rang out to all of Cologne. They were much bigger than we had expected!

“The inside of the Cathedral was one of the most beautiful architectural feats we have ever seen. From the outside, it didn’t seem to be that big, but when you got inside, it was much bigger. The stained glass windows caught our eyes, with incredible designs all over them, they were almost in every direction, high and low. 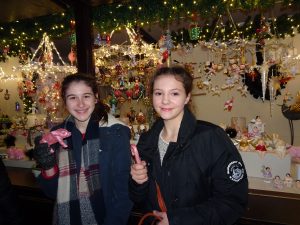 “The chocolate museum in Cologne was a highlight of our trip. Seeing how all the Lindt chocolate was made was extremely interesting. Also, the chocolate fountain, which stood proudly at the head of the museum poured the most delicious chocolate we had ever tasted, many of us going back for more! The shop at the end was also brilliant as they did many different types of chocolate, which made great Christmas presents for friends and family.

“The coach journey on the way back home was so much fun: we did karaoke, singalongs, and most importantly, the YMCA! Once we arrived back at RGS, everyone was really tired. It had been a long, but memorable, journey and everyone had an amazing time.”