Only a week after being highlighted for exceptional A Level results, RGS has this time been recognised by both the Department for Education (DfE) and The Daily Telegraph for the excellent GCSE results achieved by pupils last year. 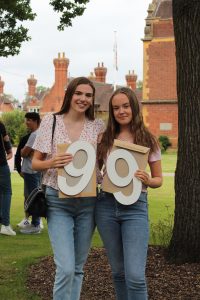 As an Independent school free from Government constraints, RGS has for many years advocated and supported individualised and broad GCSE subject choice. However, even using the DfE’s very narrow subject performance criteria, RGS ranked 3rd and 4th in Worcestershire, and was the top school in Worcester, for the Government’s much-heralded Ebbac and Attainment 8 benchmarks. These results highlight that pupils at RGS are performing at a high level, even when measured against narrow measures that the Government sees as key performance criteria.

RGS was this week placed in the High Pupil Outcomes/High Value For Money quadrant of The Daily Telegraph’s analysis of Independent Schools’ GSCE performance.

Regardless of measure, whether it is narrow DfE GCSE or A Level Facilitating Subject data (which discounts Creative Subjects) or the much wider and more relevant Value Added outcomes and headline grades, pupils at RGS achieved results last year that ranked them and the School amongst the very best in Worcestershire and in almost all measures and tables, the top-performing School in Worcester. Well done to the pupils and staff for these achievements.