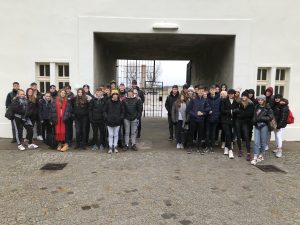 An account of the History Trip to Berlin follows:

The 2019 History Trip to Berlin was excellently planned by the History department and gave us an amazing impression of Germany both old and new. The historical landmarks and locations we visited are too numerous to discuss in one article so I wish to feature the greatest parts of the trip, in my opinion. One of these would be Sachsenhausen, a concentration camp on the outskirts of Berlin. The camp’s history was horrifying, from the appalling living conditions the prisoners had to face to the horror stories of guard brutality and treatment of those sent to these camps.

Throughout our time there, a sombre tone held the group as we imagined how it must have been to live in Sachsenhausen and camps like these. In the camp we were shown where the important political prisoners were kept and tortured both physically and psychologically, one of these prisoners being Pastor Niemöller, an important figure at the time who opposed the Nazi changes to the churches and the creation of the Reich Church. Also at the camp, we saw where the guards killed the prisoners and heard the story of the Russian soldiers sent to the camp and how they were all systematically killed by the guards. 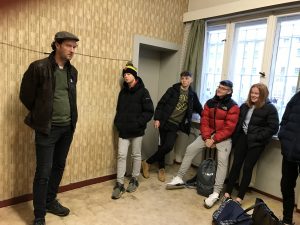 Another site worth a special mention was the Stasi Prison, which we visited on our last day in Berlin, and was where the secret police of the German Democratic Republic held political prisoners. Our guide for the tour was an actual ex-inmate and he shed light on how the prisoners were treated, how the prison operated and his personal story of how he ended up in the prison by daring to speak out against the USSR’s actions in Czechoslovakia. We were shown the old part of the prison, known as the ‘Submarine’ by the prisoners, and the appalling conditions prisoners faced within. The Stasi took people to the prison in the back of vans made to blend in with everyday life, for example those used to transport fish to shops.

One incredibly fascinating site was the Holocaust Memorial in Berlin dedicated to those in the Jewish community who lost their lives during the Second World War. The memorial is a maze of stone blocks of alternating height on sloping ground. It is designed to make people feel lost and confused when walking through, the exact emotions the Jewish community would have felt in Nazi Germany as they were persecuted. The memorial stands to remind future generations of the faults of the past, so that history doesn’t repeat itself. This was a powerful message that stuck with the group throughout the remainder of the trip.

Lastly, I would like to mention Bahnhof Grunewald, a train station we visited on day two. Trains from this station took Jews to the ghettos and death camps. A memorial ran around the station, showing when each train left, its destination and how many were on board. It was horrifying to see how many people were on the trains and simply how many trains were leaving and how they kept going almost to the end of Nazi Germany. The memorial was harrowing to everyone present as we imagined how it must have felt to be carted away on those trains to an unknown location, likely never to return. 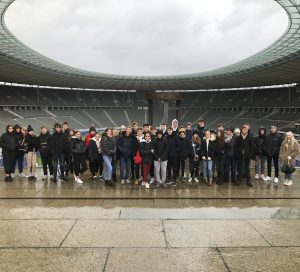 However the trip wasn’t just a sombre experience. We got to enjoy modern Berlin, stopping in the vibrant Mall of Berlin for lunch and browsing the hundreds of shops for souvenirs. Also, we went to the Alexanderplatz Christmas Market which was fantastic for everyone and great for those wanting to get Christmas presents and experience different German cuisine.