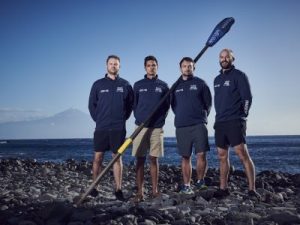 Having set off from the Canary Islands on 12 December as part of the Talisker Whisky Atlantic Challenge 2019, in an admittedly extreme response to avoiding another General Election, the intrepid crew of Atlantic Ambition is now nearing journey’s end. Former RGS pupils, Ewan Bell, Jon Merotra, James Protherough and Ed Wilson will have been rowing towards their destination for 36 days when the RGS Times is published. They are expected to arrive in Nelson’s Dockyard, English Harbour, Antigua & Barbuda (17oN 61oW) on 21 January meaning they will have done the journey in 39 days, coming in under their target of 40 days. 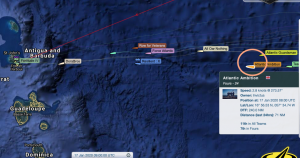 The boys who first met at RGS are all members of the Class of 2006 and wanted to take on an ‘adventure of a lifetime’ while their personal and professional lives still afforded them the time to train and to undertake the expedition. They also wanted to raise funds for charities close to their hearts. Prior to departing James and Ewan held a fundraising dinner in Perrins Hall where the boat was on display in the Quad, while Ed attended an assembly at RGS The Grange to explain to the pupils why they were undertaking the adventure and what they hoped to achieve. The question of encountering sharks was raised with great fascination as was toilet facilities on the boat – a bucket in case anyone was wondering! Under the guidance of Headmaster Gareth Hughes, who taught the Rowers at the Senior School, Grange pupils undertook a sponsored Row to add to the funds being raised for four charities. Collectively, more than £15k has been raised through these occasions contributing to the current total of £109k to date against the target they set themselves of £125k.

Everyone at the School wishes the boys every good fortune as they enter (relatively) calmer waters before what will be an emotional and triumphant arrival on Tuesday. We look forward to sharing a full account of their travels in due course and if anyone wishes to donate to their cause or track their final progress, details can be found on their website: www.atlanticambition.com