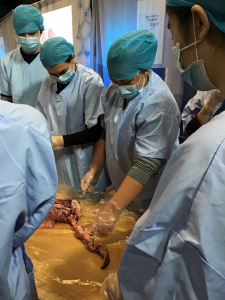 On Saturday 7 September a group of brave pupils travelled to Monmouth to take part in an Operating Theatre event. Mrs Harkness offers her summary of the day below which, we warn you, is not for the faint-hearted!

“Seventeen keen future medics from Years Ten, Eleven and the Lower Sixth were up bright and early last Saturday and heading to Monmouth School for Boys, looking forward to attending the Operating Theatre Live event hosted there. The morning started with the pupils getting all kitted up in scrubs, hair nets and masks. Then a talk offered an explanation of what the life of a junior doctor might entail, along with prepping a patient for surgery and mixing our own dose of anaesthetic. 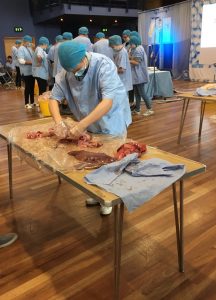 Then we moved on to dissection. All dissections were of pigs since they are the closest in size and structure to humans when it comes to internal organs. First up was the head. Students had to remove the brain, which being made of mostly water, it had the consistency of mash potato. They then had the task of removing an eye and attempting to identify the optic nerve. They also had to try and remove the lens. One notable observation from the students is that an eye is much tougher than it looks. Next, we had a look at all of the organs held within the thorax. They then got to have a closer look at the heart. They were also given the opportunity to use a stethoscope to see if they could find one another’s heartbeat, which was not as easy as they make it look on TV.

The day was a brilliant introduction to what a career in healthcare might entail along with a hands-on chance to explore different biological systems. It was certainly not for the faint-hearted but I was impressed with how our pupils took up the challenge.”

Water Sports Galore in the Ardèche River The future lies in innovation and teamwork: Senior Prize-Giving 2019