Circumstances have been challenging, emotive and provoked much ‘outside the box’ thinking. Nevertheless, educators have joined forces, shared ideas, resources and concepts and as a result, school children across the world have been given opportunities to continue to learn, despite these extraordinary circumstances.

At RGS Worcester discussions and preparations began in earnest three weeks before UK schools were officially closed. Looking at the global picture it was clear that school closure was a distinct possibility and it was vital we needed to be prepared. Our 1:2:1 iPad provision for all pupils from Year Five meant that continuing timetabled academic lesson was possible, albeit remotely. The portability and versatility of iPad, combined with the fact our teachers and pupils are already accustomed to using the device, meant we could develop ambitious plans, safe in the knowledge our Digital Learning Programme (DLP) and status as an Apple Distinguished School provided secure foundations on which to build them. Indeed, considering that both pupils and staff already use Google Accounts; the Computing & IT team quickly agreed that Google Meet would offer the best live-lesson provision. It was also decided that Google Meet should be used in conjunction with Showbie, a workflow solution that most of our academic departments already embrace whilst splitting the iPad screen between Showbie and Google Meet offered a great methodology for remote learning.

Furthermore, iPad tools such as split-screen view and apps such as Showbie were already familiar to our staff and introducing too many new concepts at this point was not something we wished to burden our teachers with. Our mantra was to keep things as simple as possible. However, we were also aware that not all teachers would be comfortable with teaching live lessons, so an alternative strategy was quickly devised; using Showbie to host pre-recorded lessons whilst a teacher remained online for questioning. There were also two ‘fallback’ strategies should teachers not be available online for whatever reason. This Digital Provision Guide was then put together, outlining the options. 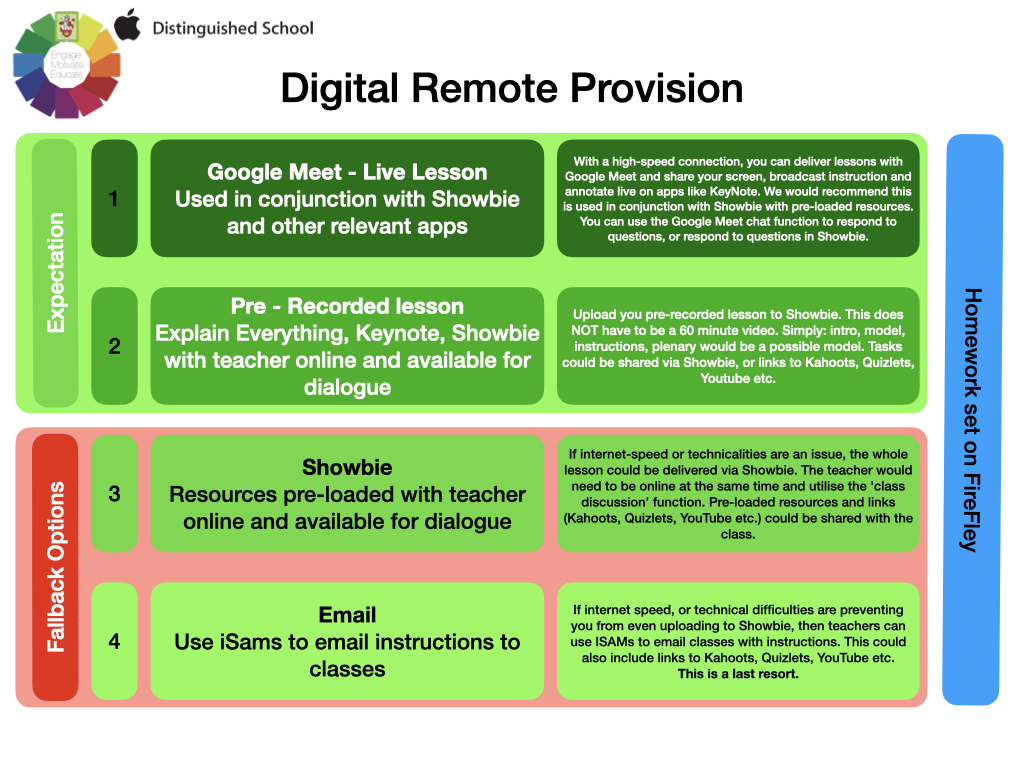 Without being sure when schools were going to close, it was deemed imperative to get teachers trained to confidently teach remotely. We hosted four sessions in four days at which attendance was obligatory. We modelled how to create a meeting in Google Meet, the best way to share invite codes with pupils and how to cast either yourself or your device screen. We showed how the Apple Pencil could be used in conjunction with Apps like Notability and Keynote to become essentially a whiteboard to model learning on. We also demonstrated how pupils could split their iPad screen between two apps so they could follow instructions and work at the same time. We also encouraged staff, in the time we still had at school, to practice using Google Meet with their pupils so all parties had some experience of using the technology before remote learning became a reality. This provided particularly useful as many minor glitches were eliminated and ground rules were established. 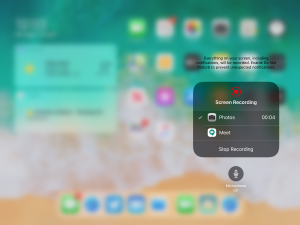 We were also able to put together three sessions regarding the best way to create pre-recorded lessons. Again simplicity was key here, and it turned out that simply using either the iPad or MacBook screen record function was a hugely popular concept for teachers. Screen record does what it says on the tin; records exactly what you do on your device but with the added bonus of being able to record instructions over the top.

This meant teachers could use Notability or KeyNote to model work, record explanations and then post to Showbie. Another advantage of this concept was that lessons could be created and then shared more than once, thus saving time. One considerable point worth reiterating here is in relation to GDPR; it is extremely important that notifications are turned off when recording, passwords are not entered and only windows that teachers wish to be shared were open. We also put together a graphic to help: 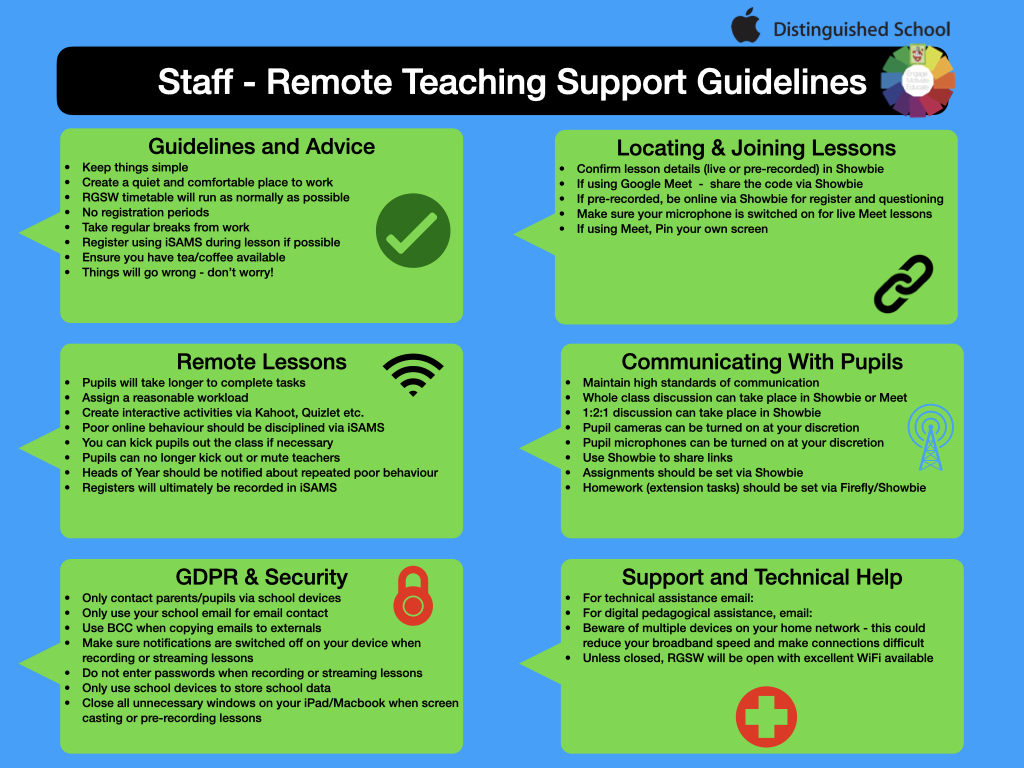 Equally as important was getting a firm and clear message to pupils about our expectations for their behaviour when participating in remote learning. Indeed, we put together a presentation that outlined exactly what they were. Next, we called emergency assemblies so that every single pupil received our message and the presentation was also emailed home to those that were already absent. In these extraordinary times, the support of pupils is essential and we needed to be able to demonstrate just how important their cooperation was when conducting remote lessons.

The rules were also put on our Trilby TV digital signage screens across the school and emailed to all pupils, along with these remote-learning guidelines that were also shared with all parents and guardians. 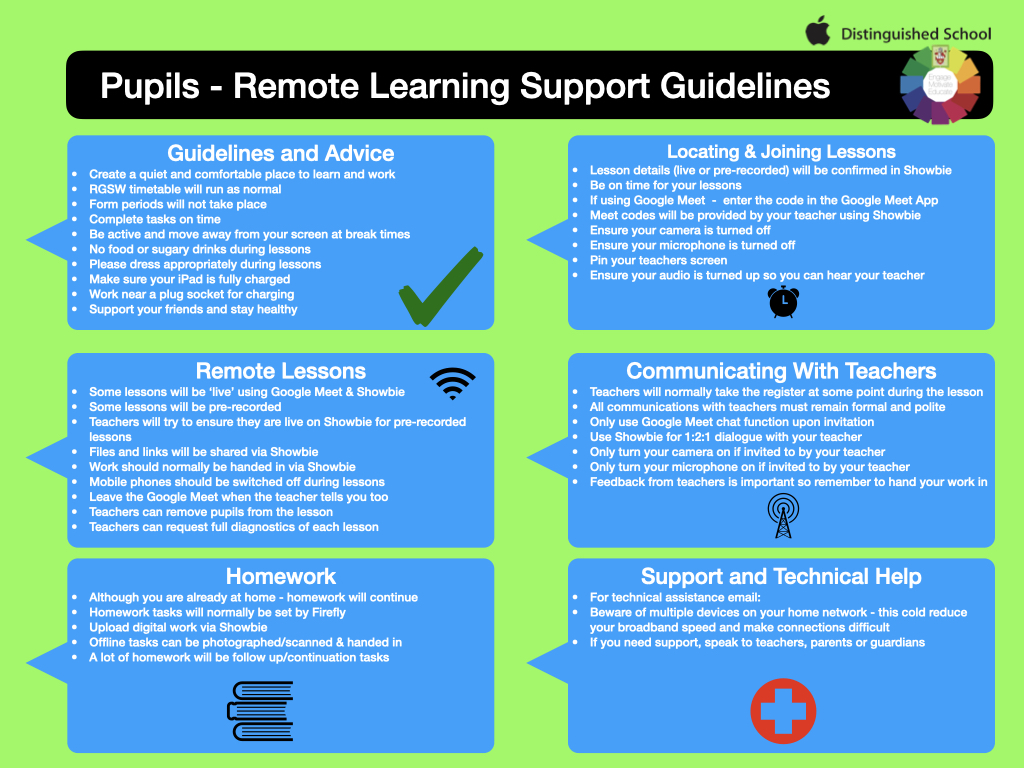 On Monday 23 March 2020, all UK schools were closed to pupils, other than for those children of Key Workers whose parents needed to continue working in the fight against COVID-19. This unprecedented move meant that, for the first time in over 1300 years of history, lessons at RGS Worcester were not taking place at the school. Instead, teachers were conducting lessons remotely, to pupils in all corners of Worcestershire via digital platforms. I was among the teachers that taught in the first period this morning at 8:45am, hopeful that all our hard work would pay off.

I taught Year Seven and Eight Computer Science and was happy with how the lessons went; the pupils were brilliant. They followed the rules immaculately (as far as I could tell), they even asked permission to use the toilet! Tasks and resources were pre-loaded in to Showbie so they had scaffolded work to complete and they were able to ask question through the chat function in Google Meet. This proved a little tricky to monitor so I adjusted to only allow questions at certain times. The ‘Thumbs-Up/Down’ emoji was used to check visibility, sound and comprehension of instruction but on occasion, I allowed selected student cameras to be switched on so they could mirror their screens to model work. It was the same with microphones; they were allowed on when messaging was not proving fruitful to address misunderstanding or miscomprehension. Generally, pupils seemed to enjoy the lessons and the only issue was connectivity for pupils with poor WiFi. However, none was so bad that pupils couldn’t progress. I asked for some feedback at the end of the lessons: 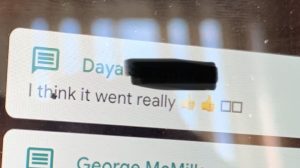 I also asked for feedback from staff so we can look to make changes if things are not working or if things are going well, so we could share good practice. Here are a few selected comments:

So, it is very early days in what promises to be a long battle vs COVID-19, where teachers stand on the very front line. However, after seeing how the education community has come together over the last few weeks, I am certain it is a fight we WILL win. The extraordinary efforts by schools to ensure learning continues in adversity, have been nothing short of miraculous. The power of education should never be underestimated and teachers yet again have proven that in the most unusual of circumstances, they can react, learn and adjust to ensure provision continues. 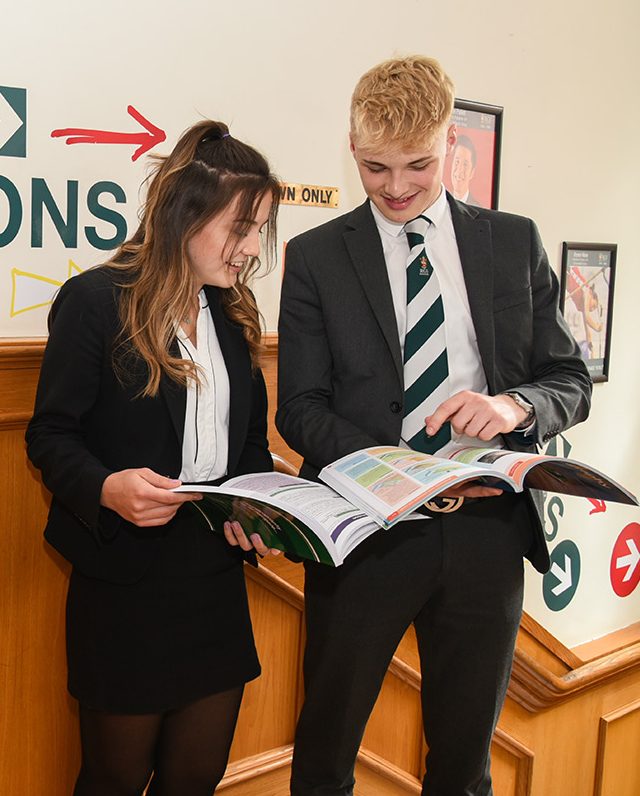 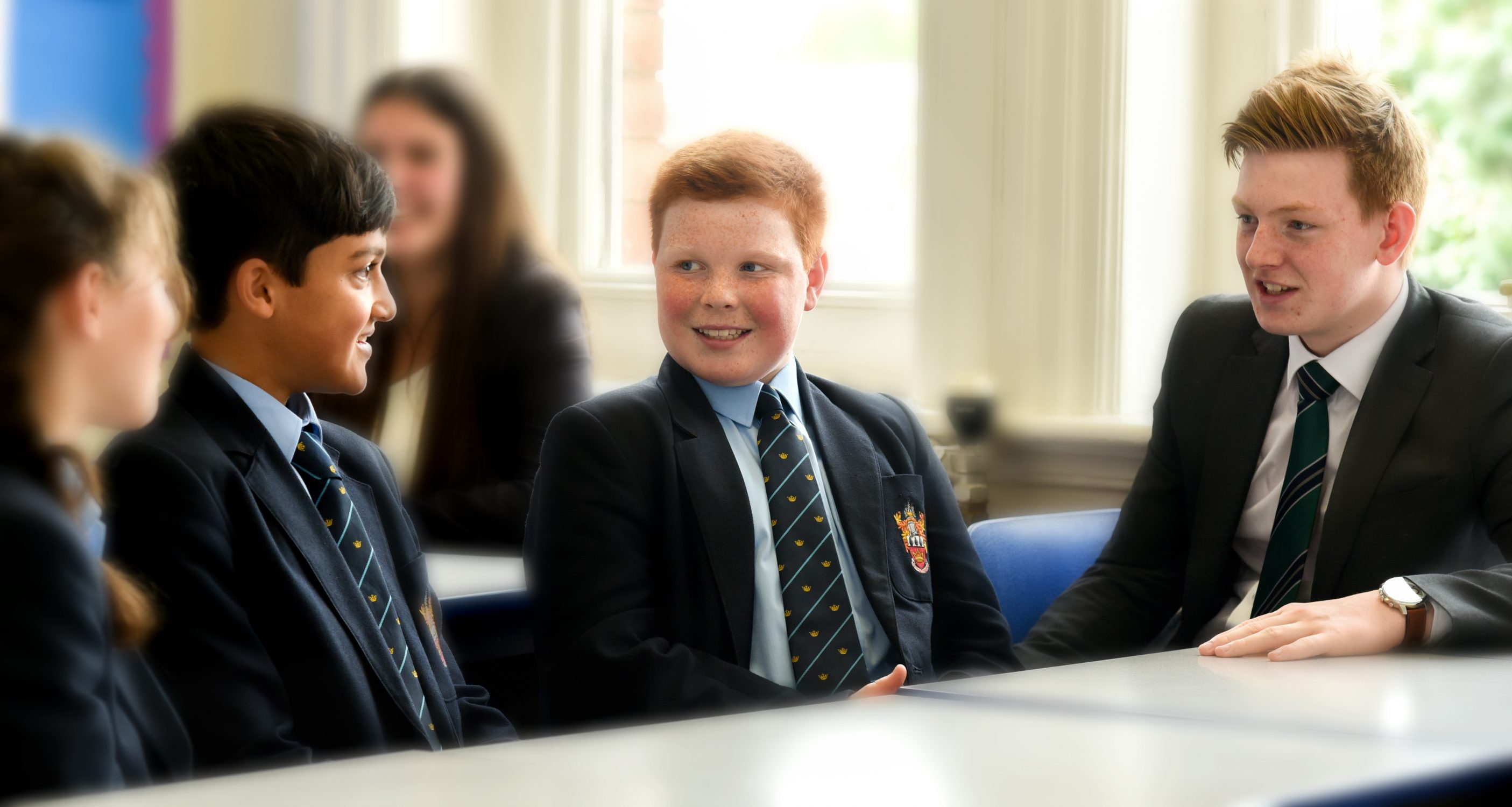 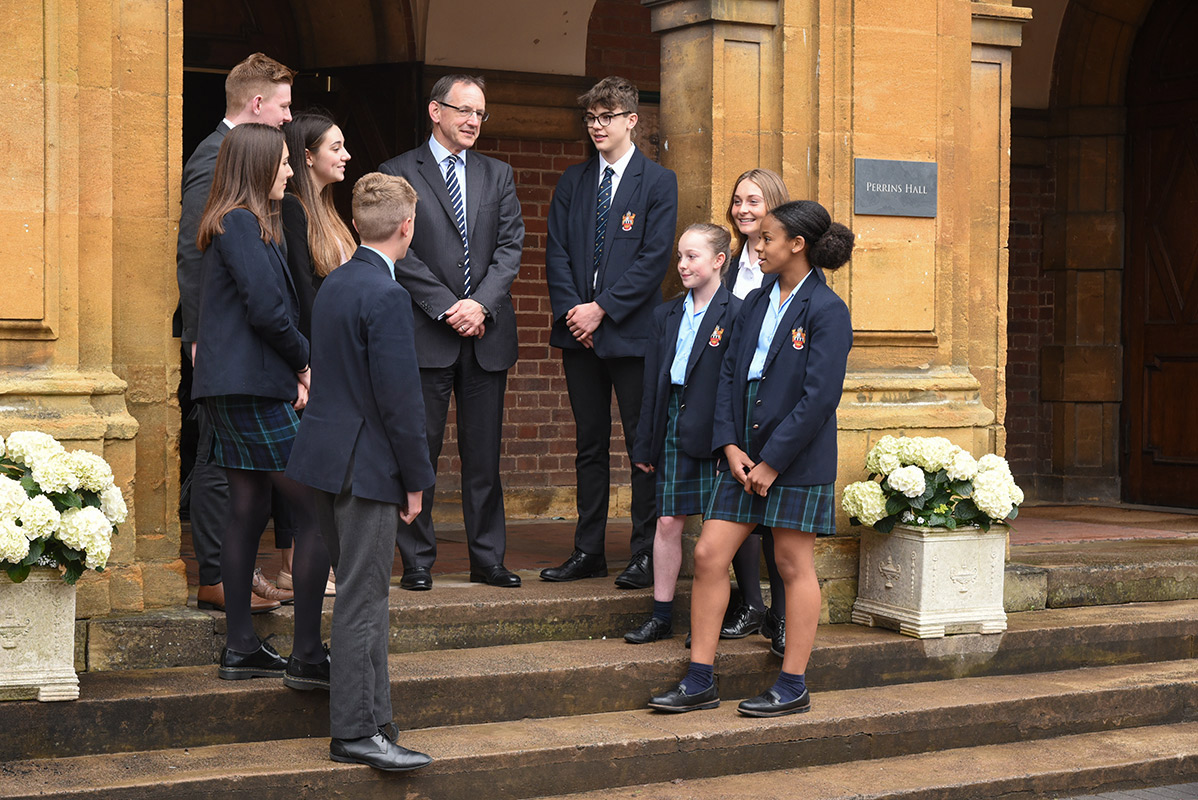