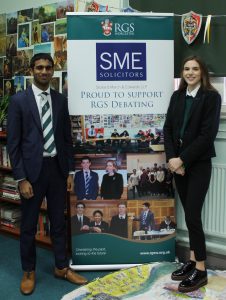 With two weeks to go before the General Election on 12 December and with turnout only expected to be around 68%, the Lower Sixth debaters last Friday were engaged in a tussle over the merits of compulsory voting. As their first-round motion in the English Speaking Union Mace, Zain Baig, Tess Rabjohn and Alice Ryan had to argue that they would make voting compulsory in the UK.

This was going to be a difficult round to get through with strong teams from King’s School Worcester, Hereford Cathedral, Malvern St James and others to beat. Speeches were seven minutes in length and students are given several weeks to prepare their arguments. Other motions in the first round included banning trial by jury and limiting people to one foreign flight a year.

For compulsory voting, Alice opened the RGS case, arguing that it would increase participation in the UK and, as has been demonstrated in Australia, could do this very effectively. Turnout in Australia has not dipped below 91% since compulsory voting was introduced in 1924 – and with seemingly very few rogue voters. Malvern St James fought back with some strong arguments about rights and freedom but RGS countered with the importance of this civic duty of voting to legitimise a government’s mandate. Tess Rabjohn also argued that it would allow currently under-represented groups to be heard more as, once they start voting, politicians would have to take more notice of their needs and this should create a virtuous circle of engagement and possibly even an improvement in political discourse. Zain closed the debate for RGS summing up our key points on why this motion would bring a lot of benefit for comparatively few harms.

The judge agreed that the RGS debaters had made a strong case, putting Tess, Zain and Alice through to Round 2 in January. The RGS team did a magnificent job, presenting their ideas well and with real academic rigour. Thank you to our sponsors, SME Solicitors, for their support – and we look forward to the next round in 2020!

Children In Need Lights of Love