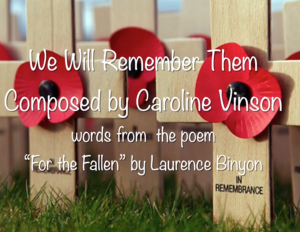 I set the words of this poem ‘For the Fallen’ by Laurence Binyon. The words I have used come from the 4th stanza of the poem, first published in September 1914. The words have, over the years, traditionally become an ‘Ode of Remembrance’ and I decided to set them to music for a 3 part female chorus. The words are incredibly powerful, and sum up the sorrow and reflection that we feel and participate in annually at our Remembrance services. I felt, in this hour of uncertainty with the pandemic, that a virtual performance of this song would be most suitable, and perhaps provide some comfort for our community and our listeners.

The RGS Dodderhill Alumnae Ladies choir have recorded their individual vocals of my song and it has been produced, edited and filmed by myself and Kirsty Haines using Garage Band and Final Cut Pro software. Please view here.

The music itself is based around a canon like chord sequence in F major which modulates into D minor as the song unfolds. The intentionally simple accompaniment underpins the 3 part female chorus which imitates and weaves in and out of suspensions leading to a middle section with more movement. The song concludes with an unaccompanied resolution into F major, highlighting the title of the song.

The choir consists of old girls from the 90’s up to the present day, and it has been a pleasure to work with them on this project.

'We Will Remember Them'